THE TRANSFORMATIONAL POWER OF FORGIVENESS

In April 2006, we lost a very good friend, Terry, to cancer. Terry had put a lot of effort and commitment into planning a perfect retirement.  is last two years with his employer, before his cancer diagnosis, turned out to be difficult, with a lot of political games and a lack of integrity in the workplace. Many of his fundamental values were seriously impacted by staying in that environment. Terry would come home angry, furstrated and hurt because of the injustice in his workplace.  During those two years, quite a few job offers came to him, but he did not want to lose his retirement package, which would become available in two years.  Then, he would be free. Then, he would be happy. Then, he would live the life he truly wanted to live.

Don't we all do this: anticipate happiness in a future that does not exist?  Do we not take it for granted that tomorrow will happen? Even though we are miserable and unhappy now, we hope to be happy tomorrow, because we truly believe that tomorrow exists. How many times do we not take responsibility for the last words we say to our loved ones when we leave them for the day, feeling absolutely certain that we will return at the end of the day?

Terry had carefully planned his retirement but he never lived to see it. In the end, all the effort he put in to make sure he would get the best retirement package possible was for nothing. Everything Terry had hung in there for, everything he had struggled so hard for did not happen.  He accepted two years of anger, frustration, unhappiness and anxiety, and for what?

Terry had changed his behaviour tremendously during the last months of his life, after his cancer diagnosis. His illness stopped him fron DOING. He had no choice but to start BEING for the time he had left. He became present to the love that was all around him. His wife, children, and good friends were at his side constantly. He began to feel and to share all the love he had inside him for all of these people.

The power of forgiveness

The greatest awakening within Terry was of the power of forgiveness, because Terry was hard on others at times, just as we all can be.  We all fall into the trap of judging and condemning others, of holding grudges and anger.  Even after having been separated and then divorced for many years, Terry had never forgiven his ex-wife, or himself, for the failure of their marriage.

From his death bed in the hospital, he asked to see her. She came to his bedside and he was able to forgive and to release the past and to find peace and love in that relationship.  The miracle of transformation had begun.  Forgiveness is the only way back to the Divine loving Source, our true home. Forgiveness sets us free from fear, anger, hatred and darkness. Until we are willing to forgive and to release the past, which no longer exists, we cannot see the light and be free to soar and to go forward in our lives.

Forgiveness heals, it sets us free and it opens up an extraordinary life filled with unlimited possibilities. It is very costly to harbour judgement and condemnation of others. It keeps us in darkness and prevents us from connecting to our Higher Self or to our loving Divine Source. To forgive and to release situations also frees others. By nurturing and holding on to past hurts, we become prisoners of the past. Forgiveness heals and opens up our inner channel so that we can once more clearly receive Divine inspiration.

Always strive to keep your link and your channel to the Divine Source open, through daily prayer and meditation, and through forgiveness. 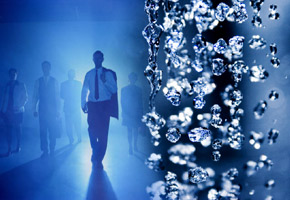 The Dark Side Of Leadership
Read more